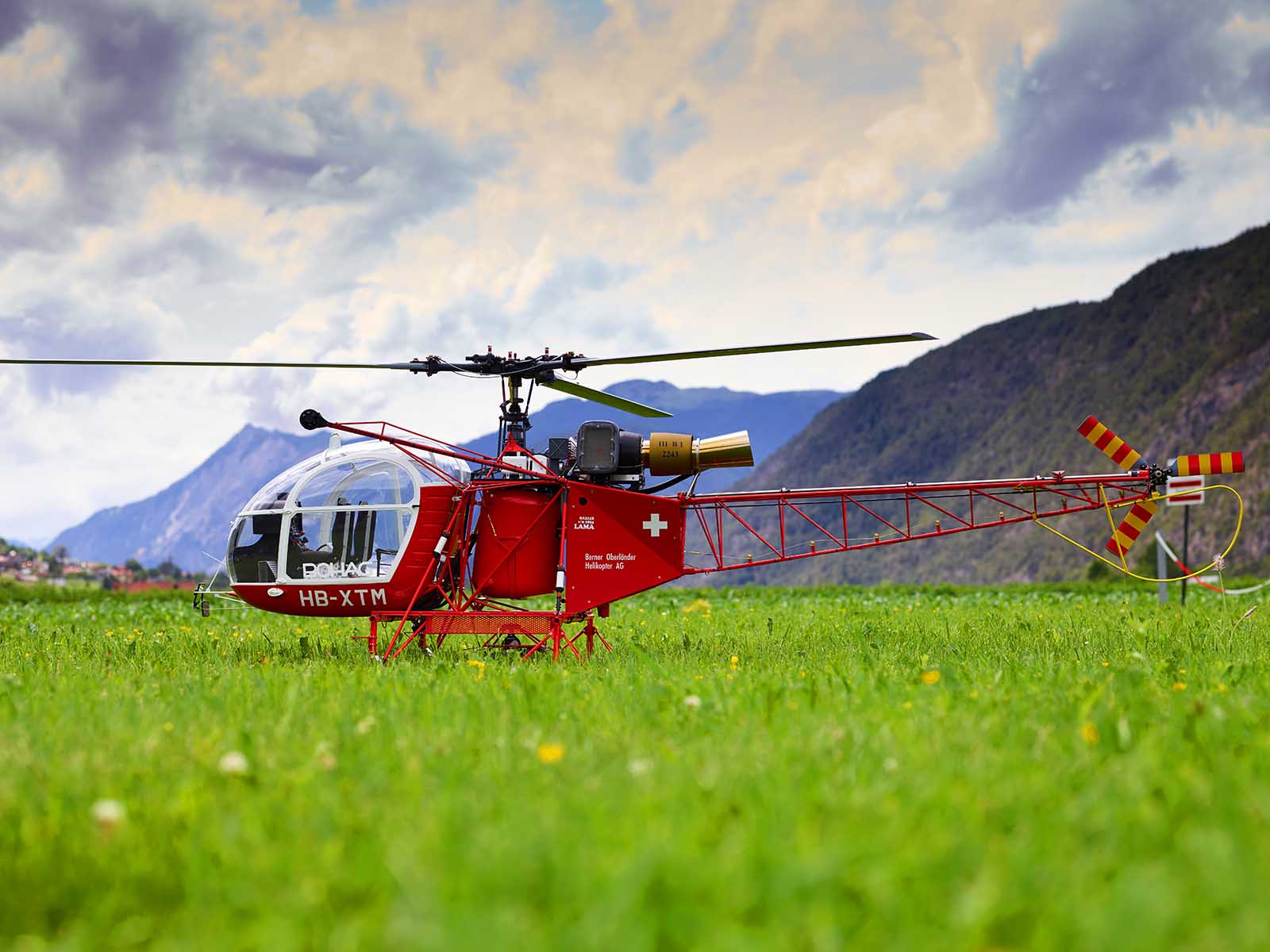 The Aérospatiale SA-315 Lama is a light multi-purpose helicopter. The Lama was originally designed by the French manufacturer Sud Aviation (later Aérospatiale) for the Indian Air Force specifically for use in high and hot (“hot and high”) environments.

For almost thirty years it held the world altitude record for helicopters.

Apart from a few stabilising struts, the cabin, which is not separated from the cockpit, is fully glazed. The fuselage frame and the stern boom are of tubular steel construction and are not clad. The lack of panelling gives a clear view and good access to the propulsion elements behind the cockpit.

The scale replica of the model is based on the superstructure of the original Aérospatiale SA-315 Lama. The fuselage frame and the tail boom are made of stainless steel tube frame construction and are not covered. The stainless steel tubes are brazed with silver solder. The frame construction in the cockpit area is self-supporting and accommodates the batteries, receiver, turbine electronics, landing lights below the cockpit floor. All mounting points for turbine fairing, airintake support system, exhaust pipe are provided on the framework. The same for battery box, fire extinguisher, paraffin pump and solenoid valves.

A full-scale cockpit is optionally available.

The scale pulpit captivates by its narrow frames and gives a very original impression of the pulpit replica after glazing. Optionally, the scale character of the canopy can be greatly enhanced by rivet reproductions, screws and the reproduction of sheet metal reinforcements. The pulpit heating can also be reproduced with 3D printed parts, among many other details. The cabin is pushed over the stem and is connected to the tubular steel frame with 2 M 4 screws. The windscreen set is included. The windows are fitted from the inside and fixed with super glue.

The fuselage area behind the tank is covered with a 3-piece sheet metal fairing. Optionally, the fold-down part can be cut out and fitted with a hinge strip to create a faithful replica of the original. The necessary drawings with dimensions are enclosed with the model.

The tail boom is removable and has stable connecting elements.

The tail rotor drive is mounted 6 times on the tail boom as on the original. The stainless steel drive tube has a diameter of 6 mm and a wall thickness of 0.5 mm. The connection of mechanics, shaft, tail rotor is done by generously designed coupling systems.

In the steel tube fuselage frame there is room for a 5 litre GFK tank. A large sight glass allows the paraffin level in the tank to be monitored. Baffles in the tank ensure that the complete filling quantity can be flown.

The landing gear with bracing is available in normal and scale version.

The swashplate control can be reproduced in its original form. For this purpose a servo mount is already installed in the rear part of the cabin. From here the original control unit can be connected to the swashplate via a lever. The swashplate then has a three point linkage like in the original.

It is also possible to mount the servos into the mechanics and to steer the swashplate directly via 4 servos.

You can also get the model as a kit with the desired 3D special parts according to your wishes. 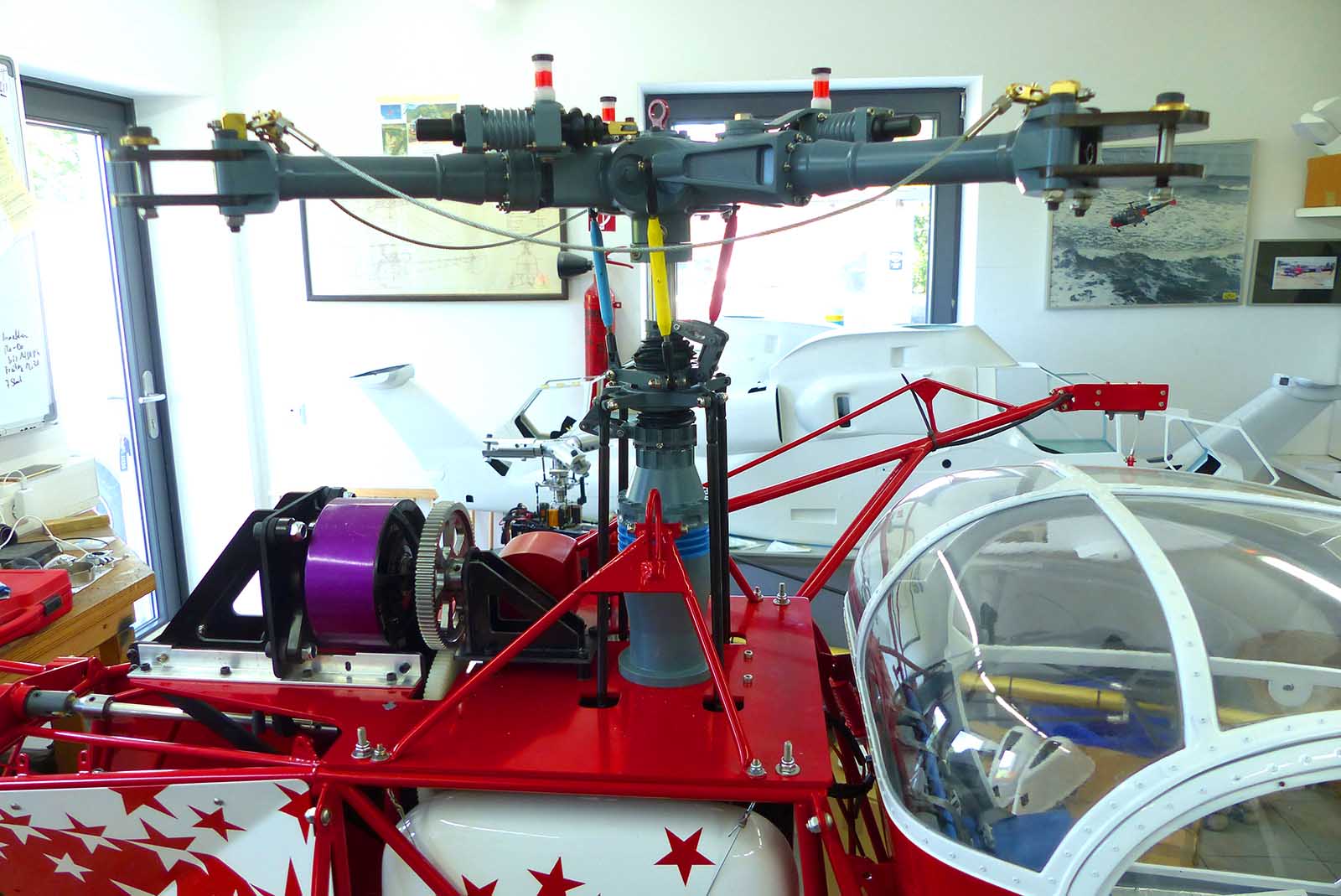 Sturdy GFK side plate screwed on a solid milled aluminium bolt form the basic frame of the mechanism.

An original bevel gear set from Jakadowsky is placed between the distance bars, which was manufactured with high precision and is driven by a main gear made of high-strength plastic. This main gear wheel with 120 teeth is designed for the desired speed of the rotor head for the llama and is milled from the solid especially for us. This ensures 100 % concentricity. The main plastic gear wheel then engages the pinion of the centrifugal clutch 27 teeth of the Jakadofsky turbine. 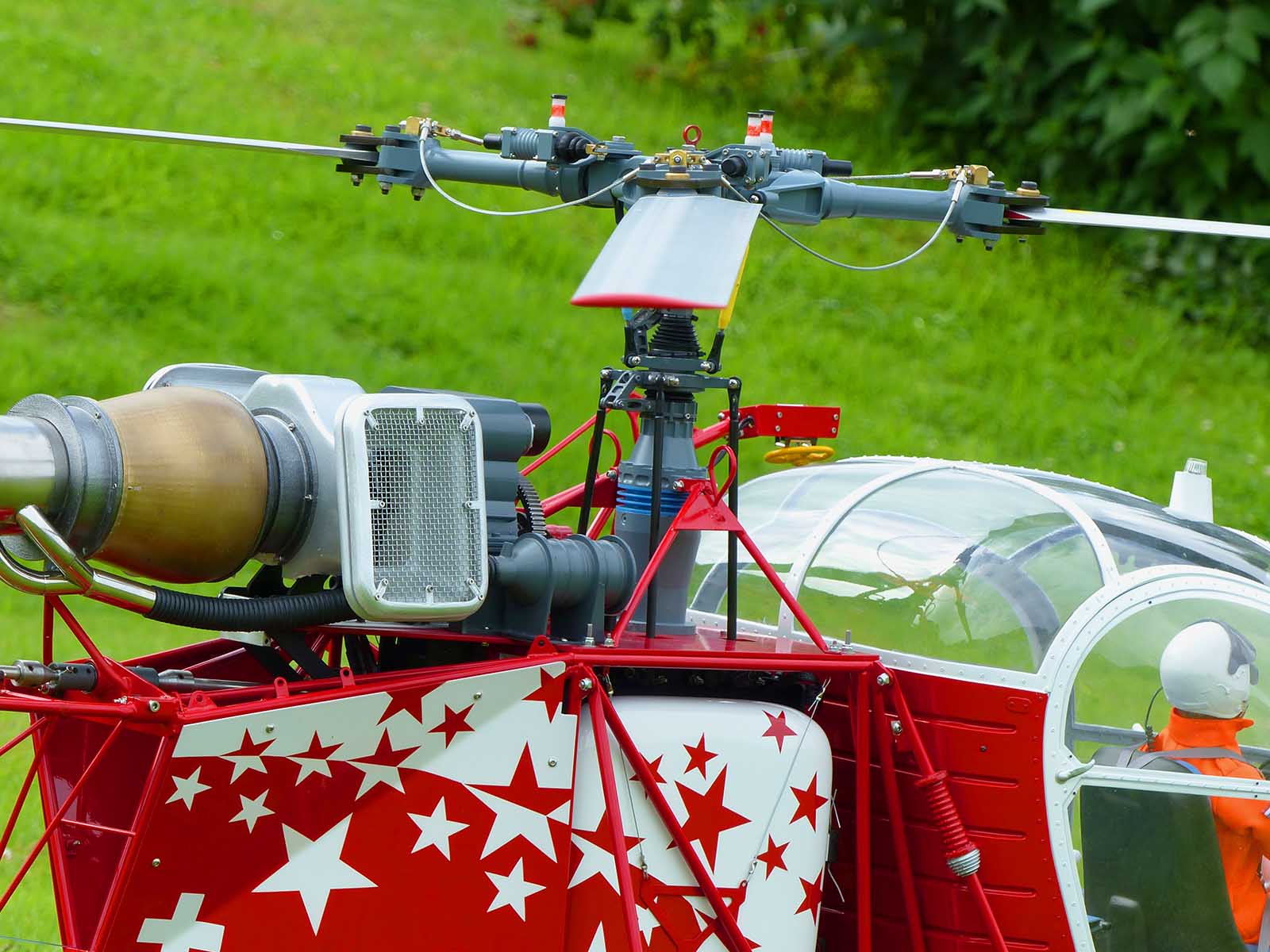 Replica completely made of metal on high-precision 5-axis processing machines manufactured for us according to our drawings and designs.

Extremely good-natured and precisely controllable rotor head with an extreme attention to detail and reproduction of the scale view of the rotor head.

Scale replica of the swash plate Lama made of aluminium. Swash plate with integrated drivers

Version for 3 servos and for 4 servos.

Replica completely made of metal on high-precision 5-axis processing machines for us according to our drawings and designs.

The 3 blade tail rotor is completely made of aluminium with a 1:1 bevel gear combination with a diameter of 23.3 mm. The bevel gears have cyclo-palloid teeth module 0.6 and the tooth flanks are induction hardened.

Thus we achieve sufficient strength for large models with increased torque which the tail rotor has to compensate.

The direction of rotation is designed for the llama but can be changed at any time by moving the gear wheels in the gearbox. Therefore a later conversion to another direction of rotation or another side is possible. A 8mm hollow drilled, case hardened and ground tail rotor shaft drives the 3-blade tail rotor with steel central piece and mounts blade holders.

Tail rotor completely made of metal on high-precision 5-axis processing machines for us according to our drawings and designs. 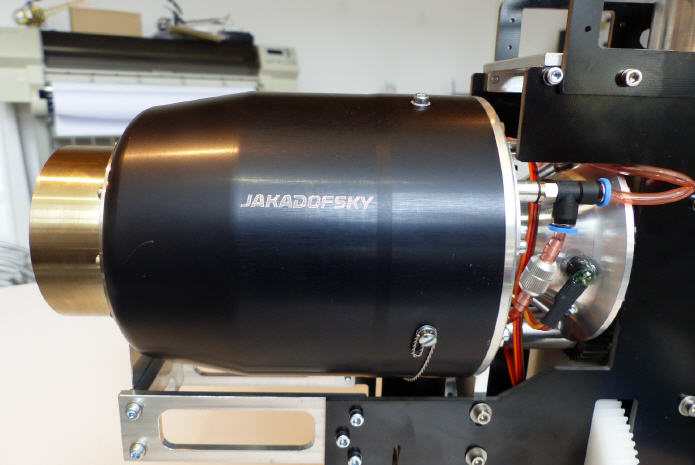 Jakadofsky turbines are characterised by their high reliability and the possibility of fully automatic start-up from the transmitter. No additional units or aids are required for this. All engines are only equipped with a CNC turbine wheel and delivered with a paraffin starting system. This has changed the performance data.

From now on all engines are equipped with our 5-axis HSC milled Nimonic turbine wheel. Advantages over a cast wheel are: Even more power, smoothness and reliability!

Electric drive consisting of Hacker Q80 motor with flanged steel gear wheel designed for the mechanics and for a speed of 887 rpm.

Bracket for motor with shaft and bearing.

back to kit components
back to model overview 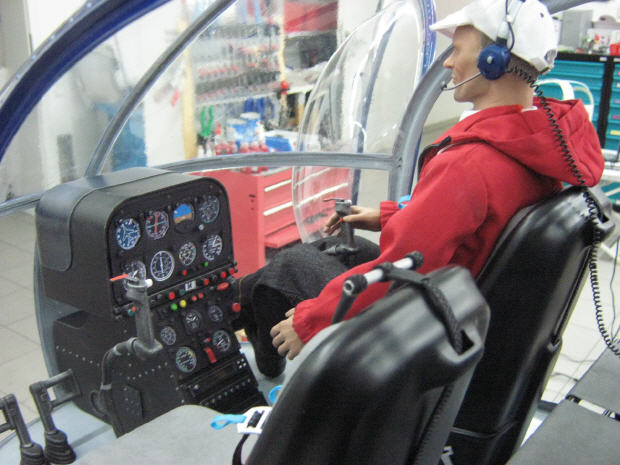 As optional 3 D pressure parts or made of stainless steel tube for the Lama model
manufactured is available:

Cabin door hinges with replica of the quick release

Entry aid on the scale landing gear left and right

read more...
Previous
Next
back to kit components
back to model overview