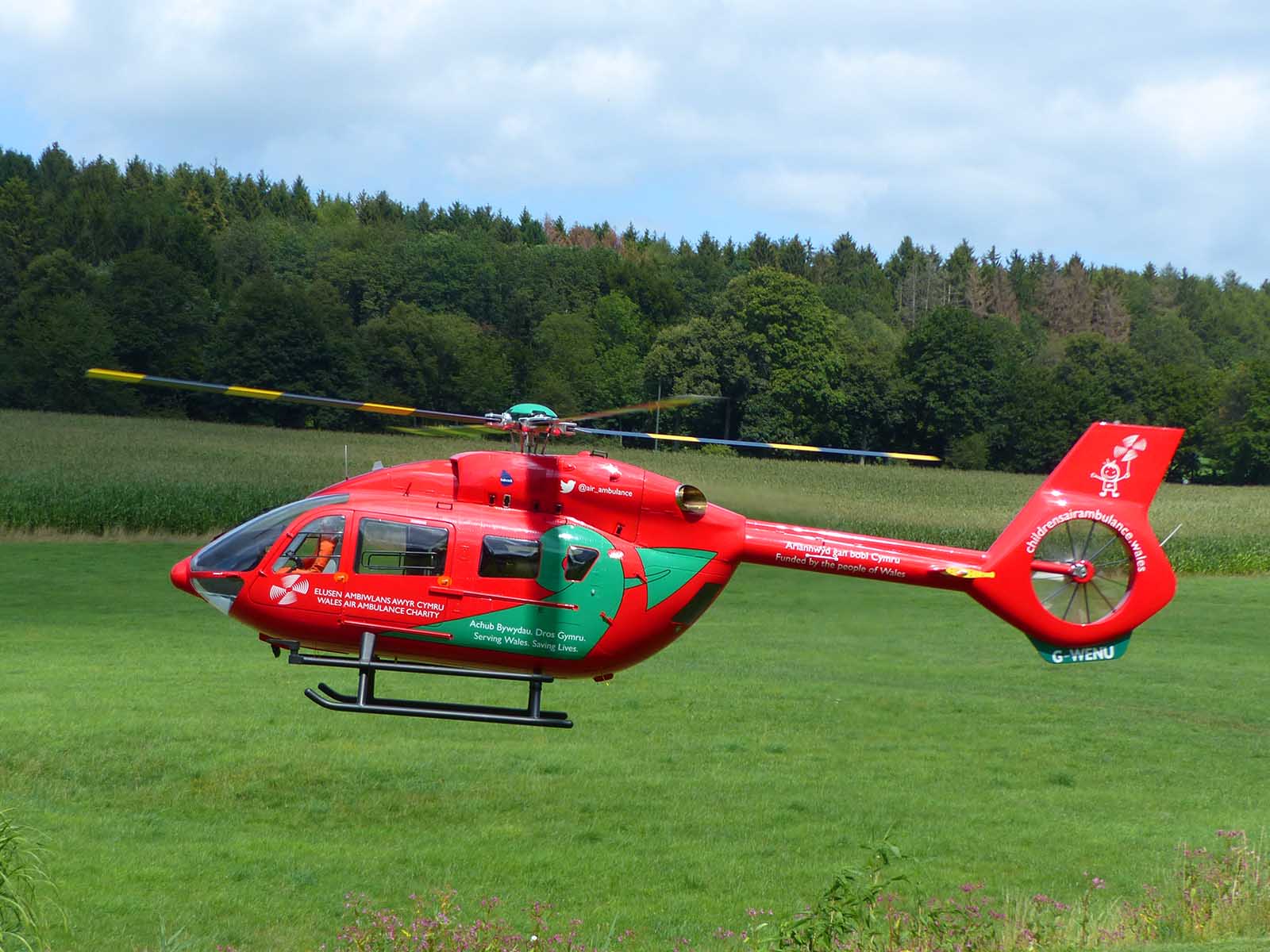 The fastest means of transport for special operations troops!

The H145 is a helicopter type from Airbus Helicopters. It was first launched on the market in 2014. It is the successor to the EC 145, which made its maiden flight in 1999 and went into production in 2002. With the successor model T2, the manufacturer Airbus Helicopters – formerly Eurocopter – implemented the requirements for a powerful and spacious helicopter, which originated from the field of air rescue, among others.

Since 8th January 2014, the former Eurocopter, an EADS subsidiary, has been operating under the new brand name “Airbus Helicopters”. In a second step, the names of the helicopter models were changed in March 2015.
The model formerly known as the “EC 145 T2” has therefore been renamed “H145” ever since.

In 2010, flight tests were conducted for the first time at Eurocopter’s Donauwörth plant with a new prototype consisting of an EC 145 airframe and a Fenestron tail rotor. For observers of the scene, the conclusion was obvious that this had to be the successor model to the EC 145.

The EC 145 was used worldwide, primarily in air rescue, but also by the military. Users in mountainous regions, however, criticised the performance deficit with a high payload, which was particularly noticeable with

The new aircraft will be powered by Turbomeca Arriel2+ series engines. These engines offer a 25 percent increase in performance and require less maintenance than the Turbomeca Arriel 1E2 engines used in the EC 145.

For the HEMS deployment, a completely new interior concept was created through a significant collaboration between ADAC Luftrettung, DRF Luftrettung and the interior manufacturer Bucher Leichtbau AG. A modular rail system makes it possible to adapt the cabin to the needs of each patient. The medical equipment can thus be arranged in such a way that the doctor and his assistants always have a clear view. If a device is not needed, it can be pushed to the side in a compact way. This ensures optimum access to the patient at all times. Unlike its predecessor models, the H145’s stretcher is positioned on the right side for the first time.

True to the modularity concept, a new type of patient stretcher with roll-in chassis has also been developed, to which all medical equipment can be attached quickly and easily for loading and unloading the patient.

Airbus Helicopters is unveiling a new version of its successful H145 model at Heli-Expo 2019 in Atlanta. The latest model of the light twin-engined multi-mission helicopter presented on the Airbus stand is equipped with an innovative five-blade rotor. This allows the H145 to carry 150 kg more load. At the same time, it opens up new dimensions in comfort, ease of maintenance and connectivity.

The military version is only slightly different from the civilian model and therefore does not have to be completely re-approved. As the H145M can also be maintained and serviced in accordance with civil regulations, the effort and costs of maintenance are reduced. This was one of the reasons why EADS/Eurocopter submitted a tender for a United States Army Light Utility Helicopter (LUH). This resulted in the designation UH-145.

EADS prepared the helicopter, then known as the EC 645, as Armed Scout 645[2] – currently Armed Aerial Scout 72X – in 2009 to compete for the next US Army Armed Reconnaissance Helicopter (ARH). The helicopter was equipped with side-mounted weapon carriers, while system partner Lockheed-Martin offers a night-vision capable M-TADS/PVNS targeting and identification system, the VUIT-2 video and communications system and Hellfire missiles for integration. Revolving cannons can also be mounted. The Armed Scout 645 was equipped with an optical FLIR sighting system under the “helicopter nose”. Night missions can also be flown, as the EC 145/BK 117C-2 is also approved for use with night vision devices. 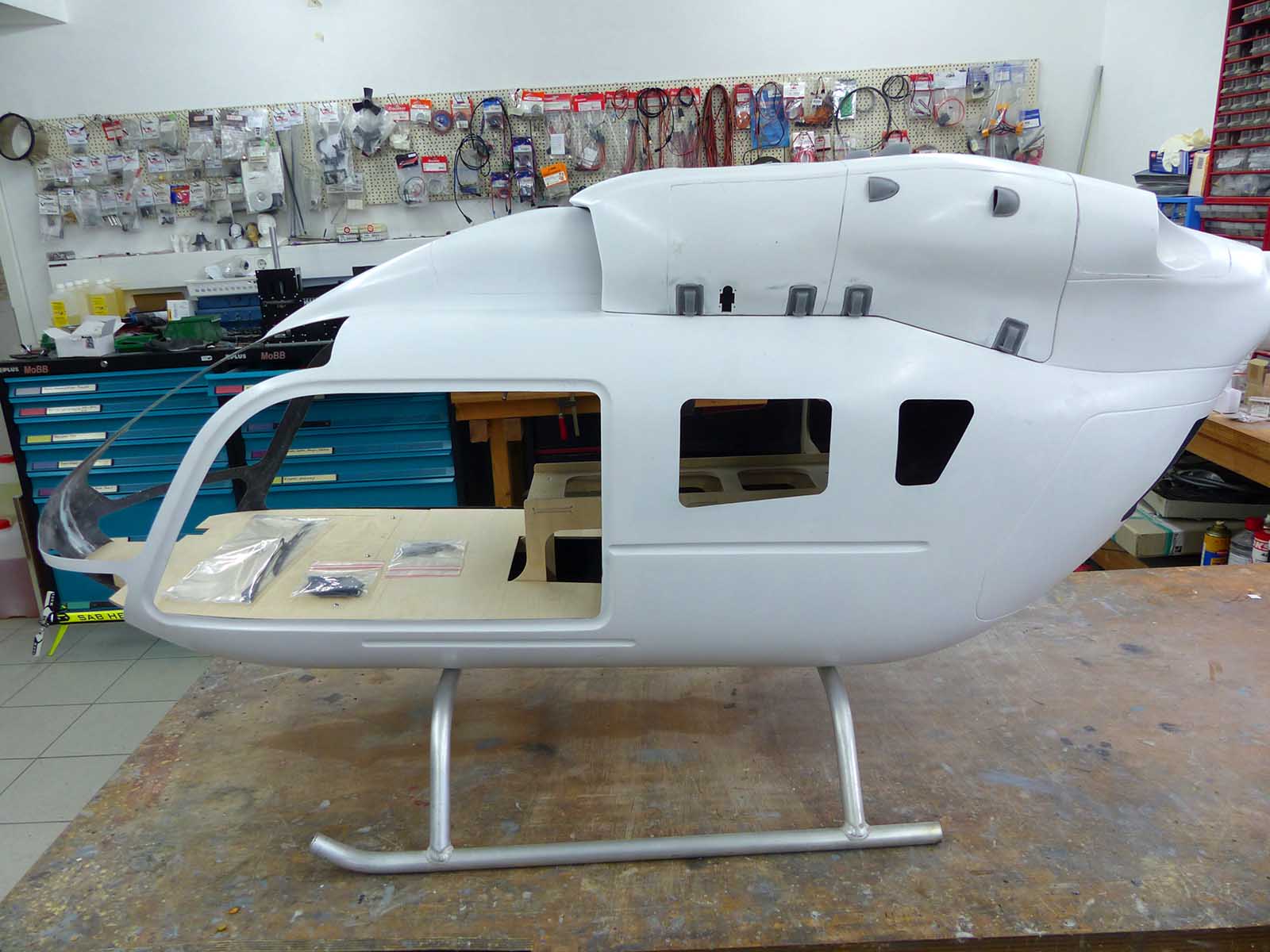 The fastest means of transport for special operations troops!

The master model was created according to original Eurocopter documents. On a large 5-axis milling machine, the master model parts were milled in Uriol and then prepared so that the required negative moulds could be produced.

The production of all GFK parts is done in 8 moulds. High-quality resin systems are used to produce high-strength, very light-weight components, which in the end produce all parts necessary for the construction of the EC 145 T 2 – 3 or M.

A set of frames made of high quality aircraft plywood is glued into the fuselage and takes care of the tank, landing gear and the turbine and electro-mechanics.

The finished model has doors that can be opened or pushed like the original.

Windows are fitted from the inside and fixed with superglue.

The cladding of the turbine-gearbox area is fitted with closure replicas. Various air inlets on and around the fairing complete the scale replica.

Optionally the fuselage can be upgraded with stern linings with rivet replicas, quick release fastener replicas. This is done after the assembly and the first preparation for painting.

Further optional available additional equipment such as cockpit, LCD monitors, interior seating, searchlight, winch etc. can be ordered separately depending on the model and let your helicopter become a unique scale replica of your dream helicopter.

The tail boom can optionally be made removable.

The connection of the mechanics to the tail rotor is done by a multiple ball bearing mounted rigid drive. If the tail boom can be removed, generously designed coupling systems take over the plug connection.

To optimise the weight, the new tail boom is constructed in CFRP / GFRP and is extremely light with extreme torsional rigidity.

The newest variant H 145 – T3 is built up with the HF 5 blade rotor head with 5 blade swashplate.

The model is completely assembled by us. You can choose between:

– Model ready to build, as an extension model with the desired 3D special parts according to your wishes

– Model ready to fly with drive, the desired 3 D special parts according to your wishes and the lacquering ..received.

You can choose between turbine or electric motor drive.

We mainly use remote control components from Futaba, PowerBox, Bavarian Demon, Hacker, and Jeti. The desired attachment of 3D option special parts will be considered according to your wishes. 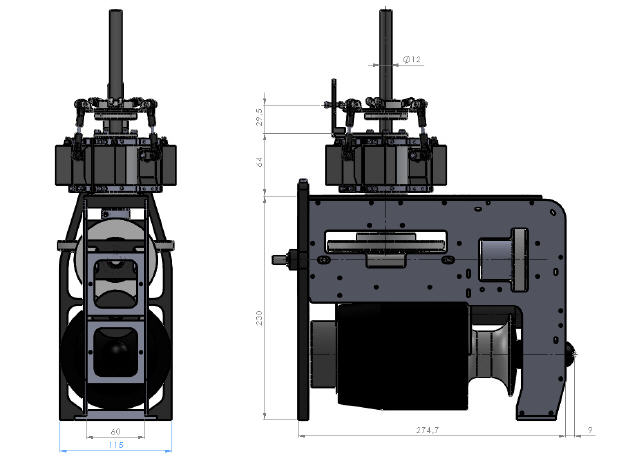 Sturdy GRP side plate screwed to aluminium bolts milled from the solid form the base frame of the mechanism.

An original bevel gear set from Jakadowsky is placed between the spacer bars. It was manufactured with high precision and is driven by a main gear made of high-strength plastic. This main gear is designed for the desired speed of the rotor head for the EC 145 and is specially milled for us from the solid. This ensures 100 % concentricity. The plastic main gear then meshes with the pinion of the centrifugal clutch of the Jakadowsky turbine. 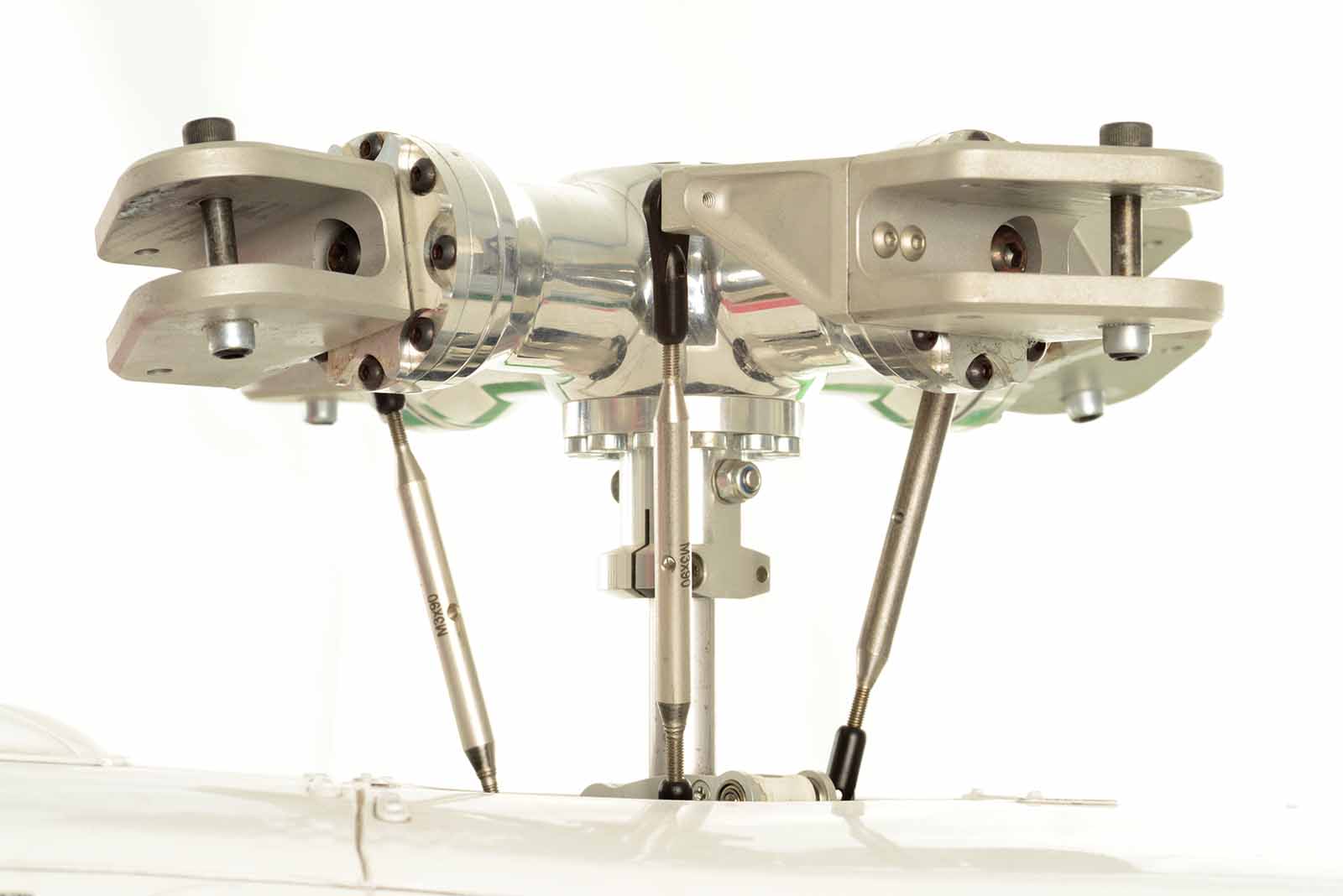 Replica completely manufactured in metal on high-precision 5-axis machining centres for us according to our drawings and designs.

Extremely good-natured and precisely controllable rotor head with extreme attention to detail and reproduction of the scale view of the rotor head.

Reproduction completely made in metal on high-precision 5-axis-machining machines for us according to our drawings and layouts. 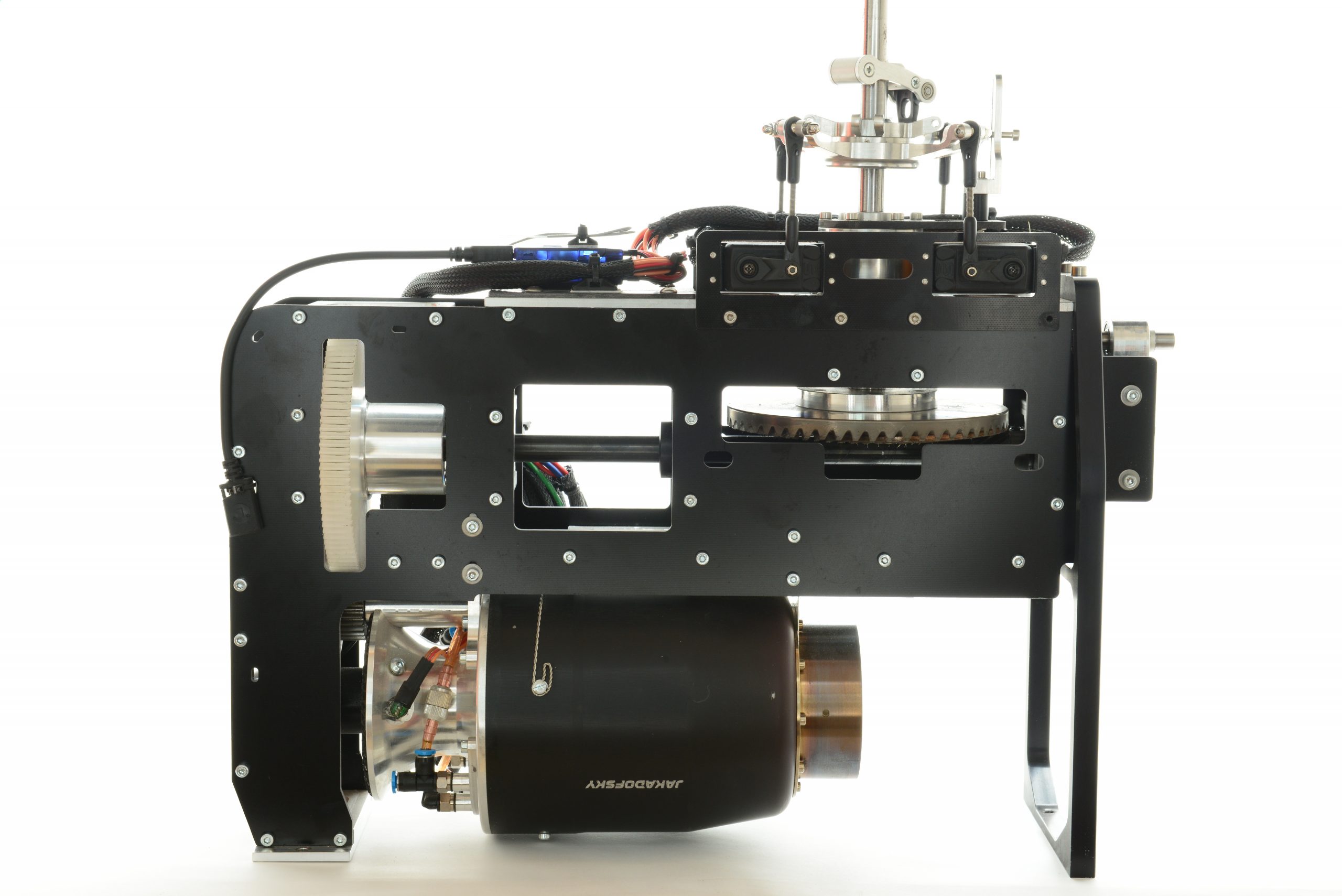 You can choose between turbine or electric motor drives.

A turbine version has a 3 litre GRP tank plus hopper tank 225 cc installed.

The 8 blade Fenestron is completely made of aluminium and has a gearbox with a bevel gear combination 1:1 with a diameter of 23.3 mm. The bevel gears have cyclo-palloid teeth module 0.6.

And the tooth flanks are induction hardened.

This gives us a very high strength and allows us to transmit high torques without any problems and over a very long life time. These torques occur especially in large models and must be compensated by the Fenestron.

Fenestron equipped with ….. blades in aluminium. Mounting of the Fenestron in the rear boom via …stator holder .

Fenestron completely in metal. All parts are manufactured on high-precision 5-axis processing machines for us according to our drawings and designs.

Fenestron with gear completely mounted and gear backlash adjusted in the gear. The stator holders are included with the Fenestron.

Drive via rigid drive with multiple ball bearings, guided in an aluminium tube with connection couplings.

Available as optional 3 D pressure parts or made of stainless steel tube:

read more...
Previous
Next
back to kit components
back to model overview