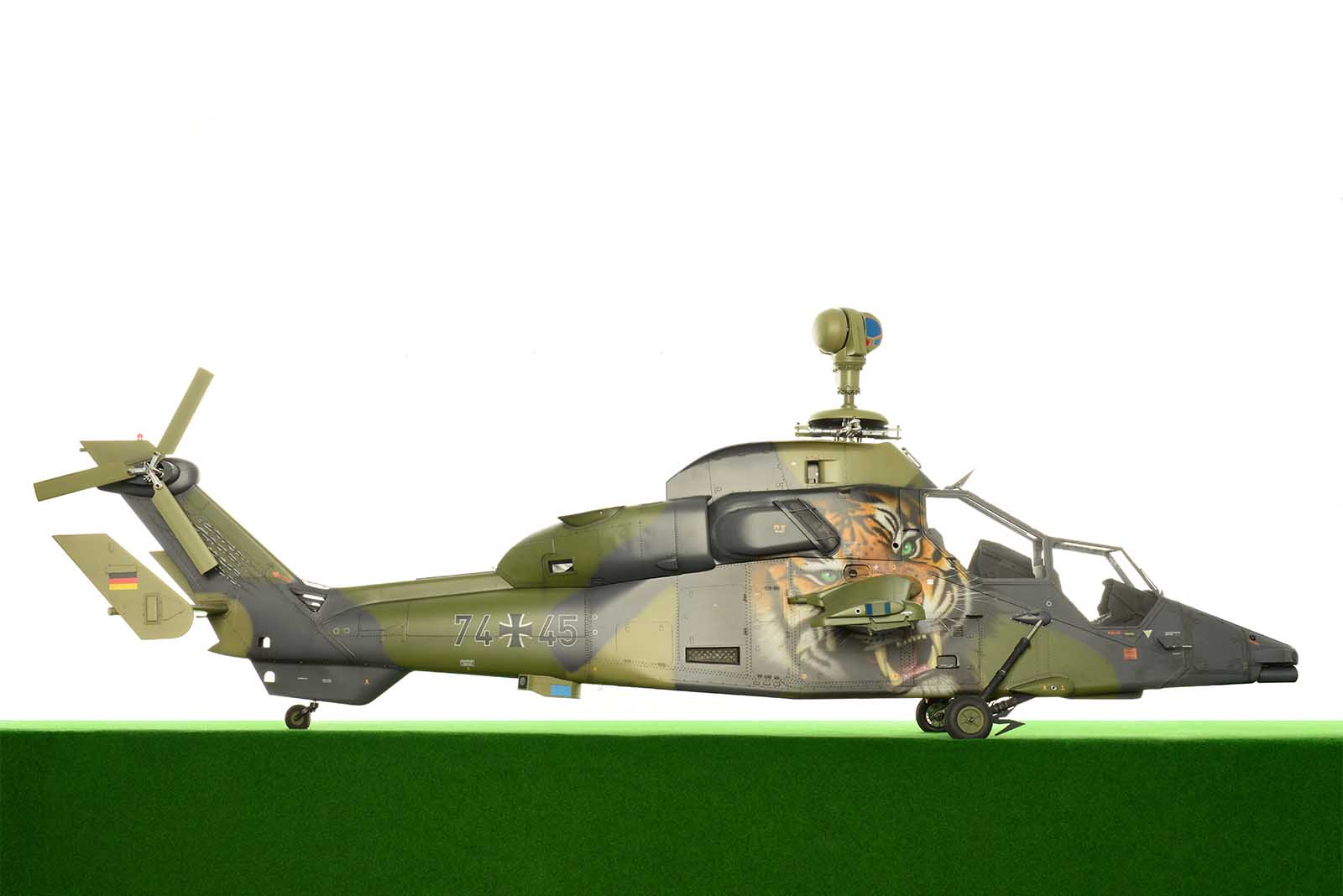 Equipped for every use…

In 1984, the German and French governments compiled a catalogue of requirements for a modern multi-role combat helicopter. A joint venture consisting of the French Aérospatiale and the German MBB was later selected as the manufacturer of choice.

Due to high costs, the programme was initially discontinued in 1986, but was resumed the following year.

In November 1989, the consortium was awarded the contract to build five prototypes. Three were to become unarmed test platforms and one each of the two remaining prototypes was to be equipped with the German anti-tank version and the French escort helicopter and fire support version. The consortium MTU Turbomeca Rolls-Royce GmbH (MTR) in Hallbergmoos near Munich, which was founded in 1989, was awarded the contract to build the MTR390-2C Tiger engine.

After German reunification, the German concept of the all-tank helicopter (PAH 2) was revised and culminated in a multi-role version (UHT), which combines the tasks of the anti-tank as well as the escort and fire support variant. The first prototype flew in April 1991, and when the helicopter divisions of Aerospatiale and MBB were merged into the Eurocopter Group in 1992, the Tiger programme was also brought into the new group.

The first major public appearance of the new helicopter (namely the PT3[2] prototype) was in the James Bond film GoldenEye, produced in 1995. The film refers to the helicopter’s EMP protection, but the rescue system also shown is fictitious.

Series production of the Tiger began in March 2002 and the first flight of a series-produced Tiger HAP for the French Army took place in March 2003. Final delivery of the first of the 80 helicopters ordered by France at the time began in September 2003 (the order was reduced to 60 in 2015). In late 2003, delivery of the first of the 80 German UH-Tigers, also planned at the time, also began to the German Federal Office of Defence Technology and Procurement (BWB), where it underwent various tests. In 2005, the first German series-produced Tigers were transferred to the Franco-German flight school in Le Luc, where they are used for pilot training. By the end of 2009, four of the planned 32 Tigers were stationed with the attack helicopter regiment 36 “Kurhessen” in Fritzlar, North Hesse.

At that time, the first ten Bundeswehr pilots were in the final three-stage type training to receive the status “Combat ready” on the Tiger. The integration of the first Tigers in the 26 “Franken” combat helicopter regiment in Roth was in preparation until 2011. In Fritzlar and Roth 32 Tigers each were to be stationed. [5] The Tiger is now exclusively stationed in Fritzlar. It replaces the German PAH-1 in these regiments. The advantages of the Tiger compared to the PAH-1 are mainly the better and more flexible armament, the high manoeuvrability and speed, the modern technology and the use of modern composite materials, which guarantee higher crash safety and bullet resistance at lower weight.

Eurocopter places the EC 665 in competition with Boeing’s AH-64 Apache. However, Eurocopter initially suffered a major setback when the UK decided against the Tiger and in favour of the Apache in a major order for 67 attack helicopters. In December 2001, however, Eurocopter was able to sign a contract with the Australian government for the delivery of 22 Tiger ARH reconnaissance aircraft. The first Tiger ARHs were delivered to Australia in late 2004.

In September 2003, Spain selected a variant of the HAD version for service in the Spanish Army. The 24 helicopters of this type ordered can be armed with Trigat, Spike and Mistral missiles. They will also be equipped with improved MTR390-E turbines to carry larger payloads. Delivery is scheduled to take place between 2010 and 2014.

As part of the restructuring and renaming of the parent company EADS into the Airbus Group, it was decided in August 2013 to rename Eurocopter as Airbus Helicopters as of January 2014. 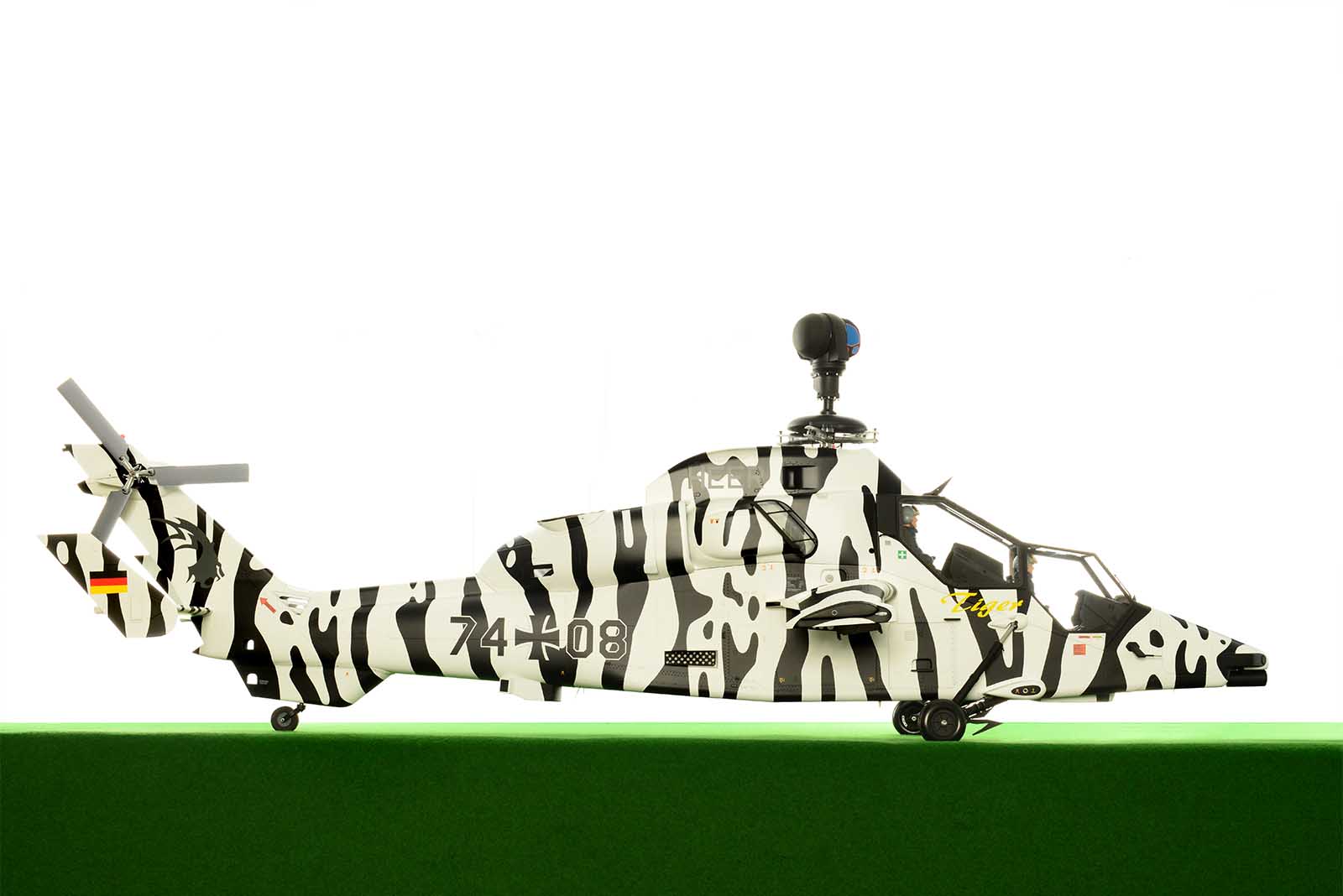 Equipped for every use…

The master model was created according to original Eurocopter documents. On a large 5-axis milling machine, the master model parts (22 pieces) were milled in Uriol and then prepared so that the required negative moulds could be produced.

The production of all GFK / CFK parts is done in 22 moulds. High-quality resin systems are used to produce high-strength, very light-weight components, which in the end produce all parts necessary for the construction of the EC 665 Tiger.

The scale surface of the model is achieved by all the many replicas of the original such as: Sheet metal butts, sheet metal reinforcements, step supports, and a plethora of rivet and screw replicas.

The tail is screwed to the fuselage as a separate part and is easy to replace in case of damage.

The elevator can be made in a screwed version.

Weapon wings are provided acceptably from the fuselage.

The cockpit can be removed in its entirety. Here a complete set of 3 D push parts is available and the cockpit monitors can be functionally mapped.

In the French variant the Tiger gets its on-board gun and its target acquisition .

The German Tiger gets a rotatable target acquisition above the rotor head.

All parts as 3D pressure parts with corresponding aluminium inner parts for the bearings. Functional drive via servos.

The tail rotor is driven by a flex-shaft drive from Switzerland, specially designed for the torque that occurs.

A set of ribs made of high quality aircraft plywood is glued into the fuselage and accommodates the fuel tank and the turbine and electrical mechanisms.

The finished model has two doors in the cabin which can be opened.

Windows are fitted from the inside.

The scale landing gear is damped and bolted to reinforcements inside the fuselage.

A stainless steel exhaust system with bypass air leads the exhaust gases of the turbine to the original exhaust points of the Tiger.

The model is completely assembled by us. You can choose between:

– Model ready to build, as an extension model with the desired 3D special parts according to your wishes

– Model ready to fly with drive, the desired 3 D special parts according to your wishes and the lacquering ..received.

You can choose between turbine or electric motor drive.

We mainly use remote control components from Futaba, PowerBox, Bavarian Demon, Hacker, and Jeti. The desired attachment of 3D option special parts will be considered according to your wishes. 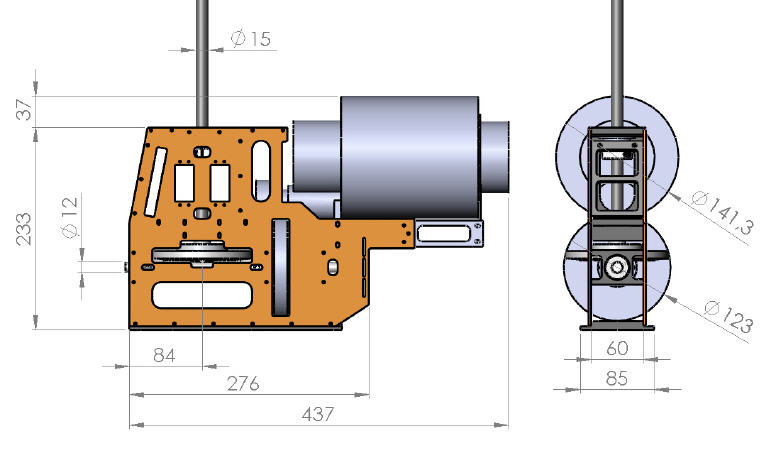 Robust mechanics specially designed for the Tiger and the position of the turbine.

Sturdy GRP side plates screwed onto aluminium bolts milled from the solid form the base frame of the mechanism.

An original bevel gear set from Jakadowsky is placed between the spacer bars, which was manufactured with high precision and is driven by a main gear made of high-strength plastic. This main gear is designed for the desired speed of the rotor head for the Gazelle and is specially milled for us from the solid. This ensures 100 % concentricity. The plastic main gear then engages the pinion of the centrifugal clutch of the Jakadofsky turbine or the electric motor. 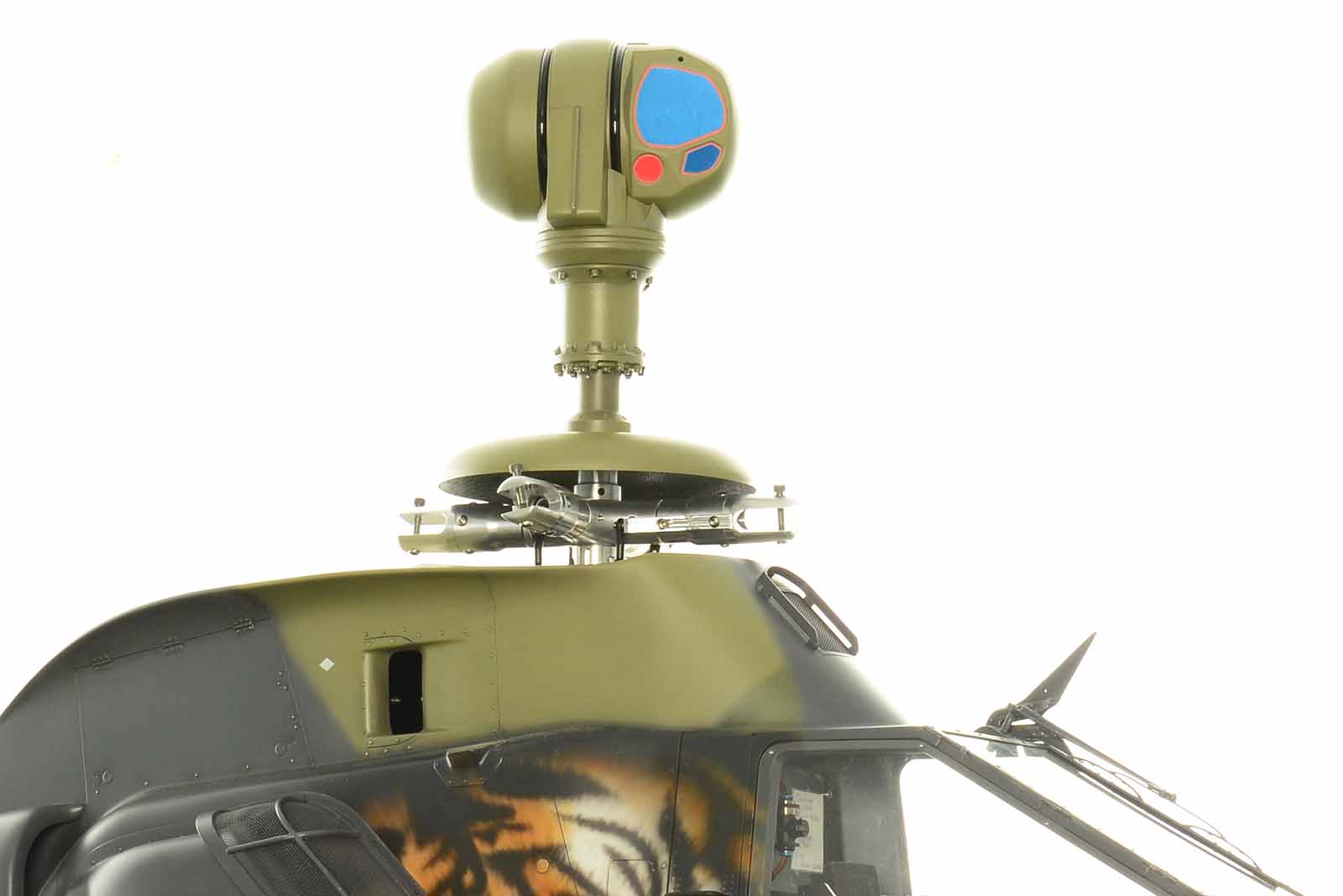 Reproduction completely in metal on high-precision 5-axis processing machines manufactured for us according to our drawings and designs.

Swashplate replica for Tiger with driver

Body completely made of metal on high-precision 5-axis-machining machines for us according to our drawings and layouts.

The 3 blade tail rotor is completely made of aluminium with a 1:1 bevel gear combination with a diameter of 23.3 mm. The bevel gears have cyclo-palloid teeth module 0.6 and the tooth flanks are induction hardened.

This way we achieve sufficient strength for large models with increased torque which the tail rotor has to compensate for.

The direction of rotation is designed for the Lama, but can be changed at any time by changing the gears in the gearbox. So a later conversion to another direction of rotation or another side is possible.
A 8mm hollow drilled, case-hardened and ground tail rotor shaft drives the 3-blade tail rotor with steel central piece and mounts blade holders.

Tail rotor completely made of metal on high-precision 5-axis machining centres manufactured for us according to our drawings and designs. 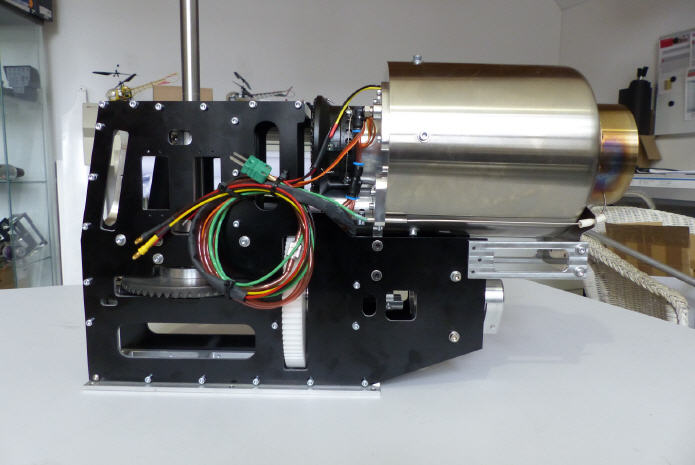 Robust mechanics specially designed for the Tiger and the position of the turbine.

Stable GRP side plate screwed onto aluminium bars milled from the solid form the base frame of the mechanism.

An original bevel gear set from Jakadowsky is placed between the distance bars, which was manufactured with high precision and is driven by a main gear made of high-strength plastic. This main gear is designed for the desired speed of the rotor head for the Gazelle and is specially milled for us from the solid. This ensures 100 % concentricity. The plastic main gear wheel then engages with the pinion of the centrifugal clutch of the Jakadowsky turbine or electric motor. 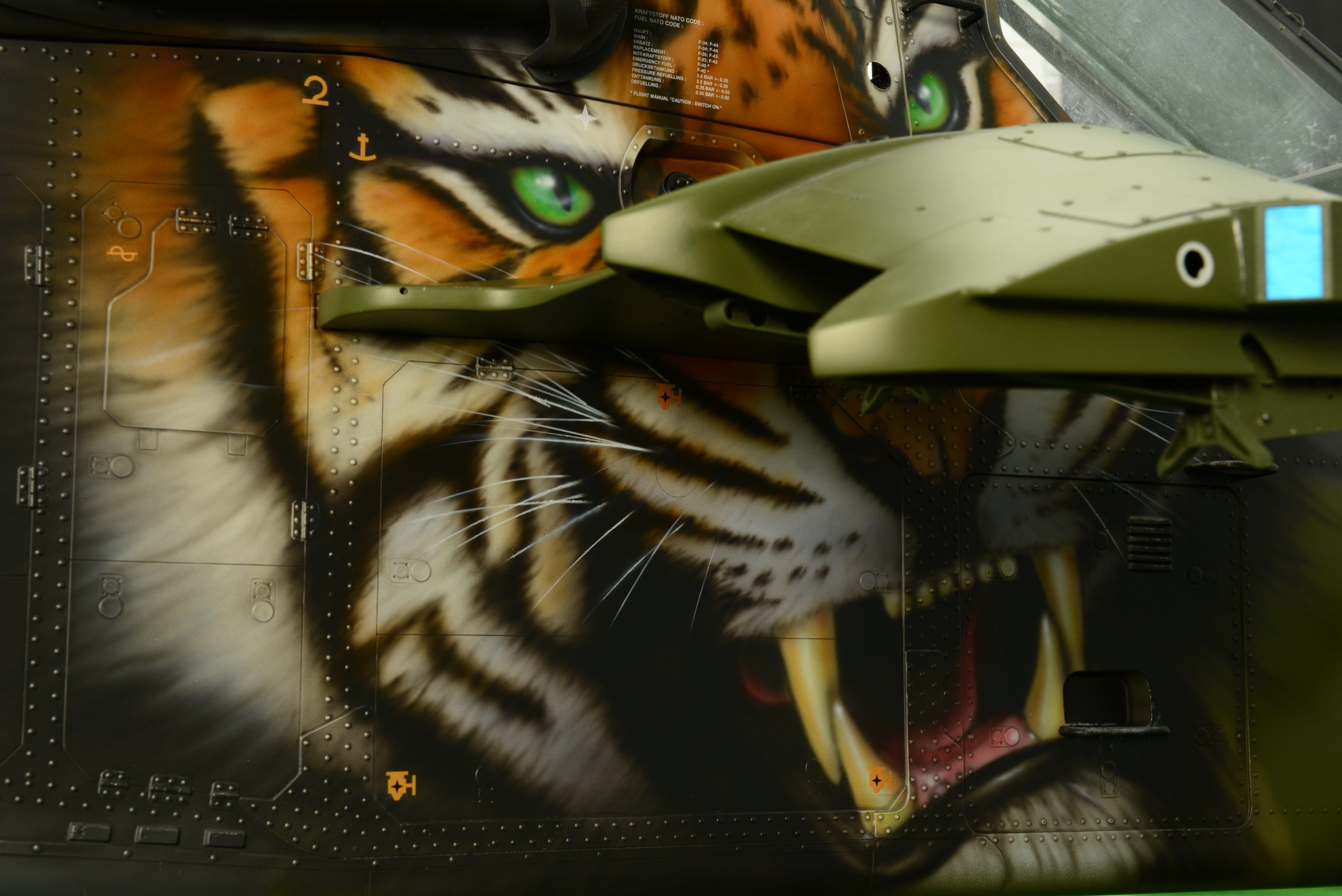 Scale add-on parts that are not included in the kit and must be ordered separately depending on the model.

– Cockpit complete, static or with LCD monitors with function pictures.